I wanted to wish you all the most best and very Happy New Year. Be safe tonight in celebrating and ringing in the New Year

Posted by Jayme Downs at 7:23 PM No comments:

This year we're going back to our same ol' same ol'. We'll be hanging out and partying with our friends at my husbands best friends house. Last year we stayed home because the year before that I ended up getting REALLY REALLY bad sick. Don't even mention GoldSchlager and Buttery Nipples around me. I get sick just thinking about Bailey's Irish Cream now. Blehhhhhh! So the last 2 years All I've heard is "hey, want some GoldSchlager??" They are so mean! ;) We'll be singing, dancing, playing pool, air hockey, volleyball, badminton, eating and drinking. What are your plans??

That day is also my neices birthday. Her and I share something in common....holiday birthdays. Mine is the 4th of July. But anyways, we'll be doing birthday stuff earlier that day. She's be 3 years old.

I haven't been very scrappy the last couple of weeks. I wanted to get back to scrapbooking this week, but I haven't been able to because of this toothache. I'm hoping it gone now. It feels a little better this morning.

Will You Keep Your New Year's Resolution?

Will You Keep Your New Year's Resolution?

Merry Christmas my blogging friends, from my family to yours.

I made 7 of these little notebooks. They are little composition books-- 4.5 x 3.25 in. The 3 in the middle were made for the kids bus driver and teachers. I made one more that isn't pictured for the teachers aide in Saira's class. She's practically another teacher. ;) So I hope that everyone that received one enjoys them. I had ALOT of fun making them. 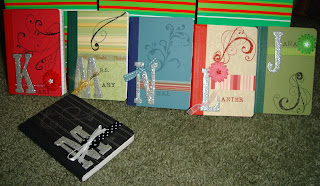 I was busy busy since I finished and mailed my Thanksgiving Cards. And I really can't figure out why it took so long to make all my Christmas Cards. ?? It's not like they were a difficult card to make. I made 28 of them though. 2 slightly different cards. So that was nice having something different, rather than the same ol' card...over....and over....and over again....LOL 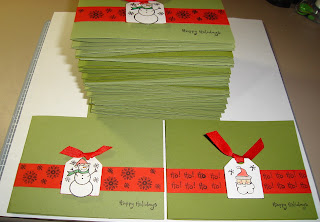 I had tried out for the Scrapperie Tres Chic Girls Design Team. Last night the 4 new lucky ladies were revealed. My named wasn't called, but that's alright. I'll try again in April. :) It was my first time to ever try out for a design team call.

Today were the kids Christmas Parties at school. Lemme tell ya, I'm completely and utterly exhausted. Saira's party was this morning at 10am. Ryan's was at 2:45pm. I'm actually glad all of that is over with. I never say things like that about Holiday stuff, but their party preping was wearing me out. Especially having Saira's party with both the Pre-K. Ryan's was the best one yet. One of the other moms helped me out with his. And his teacher had all the 2nd graders outside playing, so therefore me and the other mom started putting out the plates and napkins and drinks. We decided to go ahead and put out the treats and so forth. I tell ya, that was sooooo much better than running around trying to get it all passed out like mad men. I guess I can tell that group of kids are getting older now for sure, I could totally tell a difference in their behavior. And I'm sure that helped out with the party as well. So now I actually look forward to the Valentine and Easter paries. :) :)

Maybe now I can sit back and enjoy the rest of the Holiday Season. It's been so busy busy busy this year. And I guess that's because I have both kids in school now.

I was checking out my blog friend Vicki's blog and saw she linked over to a giveaway. So I checked it out and you should too. SheetLoad of Cards has a GREAT giveaway going on right now!! :)

I needed to make a card for Ryan to give his friend tomorrow. She turns 8 and they'll be having a birthday party at her house after school. He's so sweet. He bought her a cross neckalace from the Santa's Workshop the other day as her birthday gift. I just keep thinking... Awwwwww!! 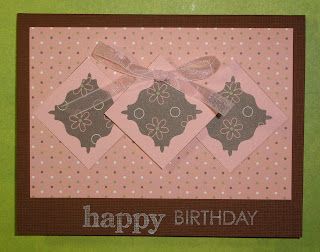 Boy am I a sucker or what? LOL I was at the school awhile ago, letting the kids do their santa workshop shopping. And Saira's teacher asked if I sent a note back saying if I'd help with the party next week. I told her no, not yet. And I asked who was in charge (gesh, that was a mistake...lmao). She did a pouty face and said no one yet. And so I said I'd do it. I swear something is on my forehead saying, 'Ask Jayme, she'll do it!!'. I was planning on doing Saira's class party for Christmas. But when she sent a note home the other day saying that both the AM and the PM class were going to do it together I was like OH HECK NO. I'm not doing a party that big. I honestly don't think it's fair. And I'm not brave enough to step up and say so. I wish someone would though. UGH! So I told her we'd do the project I had planned. Therefore I need to go and take pictures of the kids. We'll make a picture ornament. :) That's what I had the kids do when Ryan was in Pre-K.

I'm still here... :) I've been busy making Christmas cards. I'll have a picture posted on here after I get them mailed. Can't spoil it for my blogger friends that get cards. :)


This evening I found some decorations and lights to put out that were hiding in my closet. My musical carousel and my little snowmen lights. The kids just love the musical carousel!! 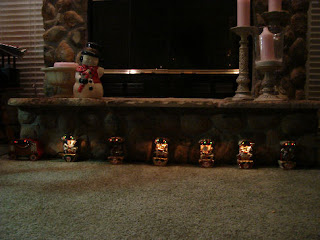 Posted by Jayme Downs at 6:08 PM No comments:

...at Scrapperie.com.
Isn't that just too cool? Thank you Colleen for picking my layout today, from all those other terrific works of art. 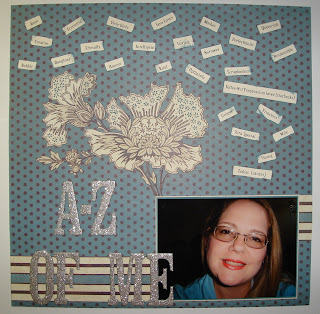 Yesterday I went for an eye checkup so I could get new glasses. Everything is well, still have wonderfully healthy eyes, just blind as a poor ol' bat. LOL And these are the glasses I picked out. I can't wait for them to come in....so I can see better. Wonder if I'd scrap better? LOL ROTF!!!! ;)

And last but not least today I received this gorgeous card in the mail from my dear sweet blogger friend. :) Kari, you did a wonderful job, I love that little felt tree!!!!! I love it and thank you so much for sending it to my family and I. 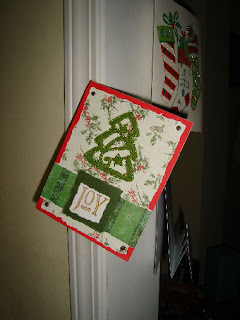 I'm suprised with myself. lol I've made 9 layouts in the last 5 days. I have no idea what's gotten into me either. LOL Whatever it is, I like it. I have lots more layouts that need to be made. I have pictures everywhere it seems. Plus 1/2 a zillion more to order.

Anywho, here's what I made last night. 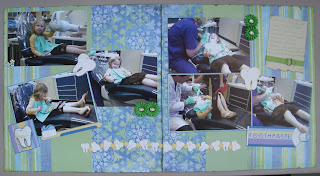 I love these pictures. That night when Saira got her pink gun, it was so special. Ryan use to get lots of toy guns. You know those ol' cheapo's from the cheap toy isle. LOL Well Saira has ALWAYS said she wanted a Pink Barbie Gun. We don't know where she got that from, but she wanted one. Well, on Aug. 26, 2006, Chad's grandpa called us and asked if Saira still wanted that 'Pink Barbie Gun'. lol We told him yes. And he said, OK I'll see ya'll later then. A few hours later, him and grandma showed up at the house. And handed Saira a big long back that said Crickett on it. She was sooooo excited! Cause you gotta remember, Chad's family is all about guns and hunting. So at 3 years old, Saira got her first gun. She bypassed the BB Gun like Ryan had gotten and went straight to a 22....LOL Spoiled little thing. ;) 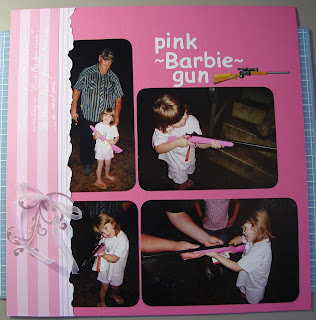 It's either to dark or to bright in here to get good pictures of my layouts. But you actually can see and read the journaling on the page.
Jouraling reads: Saira always talked about wanting a "Pink Barbie Gun". So Paw-Paw found her one... ...a real one!
I used American Crafts papers, Carriage and Lullaby; Peppermint textured cardstock by The Paper Company; alpha stickers from Creative Memories; EK Success stickers; Autumn Leaves stamp; Colorbox ink and Tim Holtz Distress Ink; don't know what ribbon that is.
(I should probably journal some more on it....LOL)

These are two layouts I made this afternoon. They go with these other two I made in October. That's my little nephew. 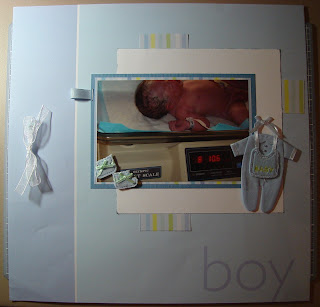 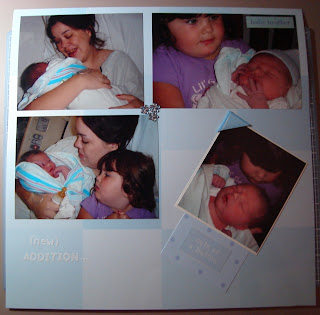 I made this one just awhile ago. I'm so glad I'm done with these pictures. I'm tired of baby blue. LOL I couldn't think of ANYTHING at all to do with this layouts. 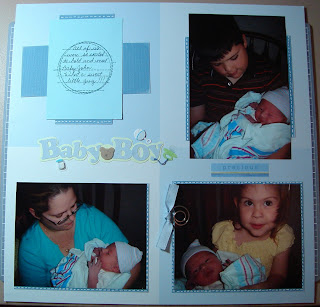 Another from last night

This one is rather plain. I couldn't figure out what to do with it. It was driving me crazy. So this is the finished page. ugh!! 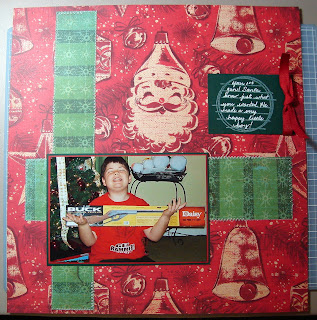