We went on a 2nd trip to be with Chad for Easter. And the Easter Bunny even knew where to go.  :) 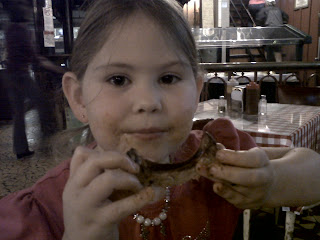 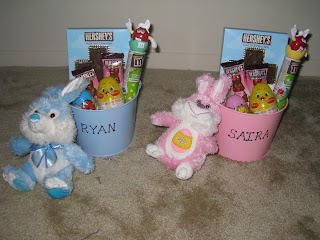 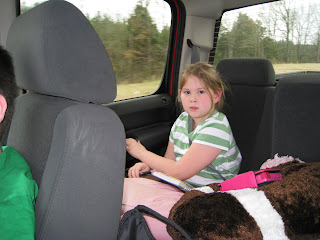 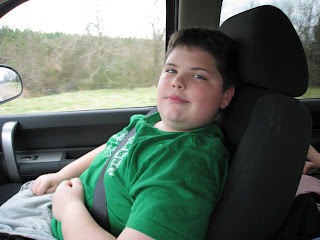 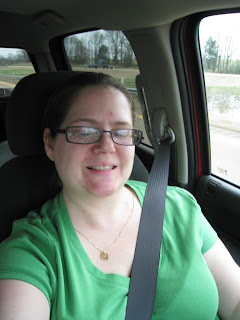 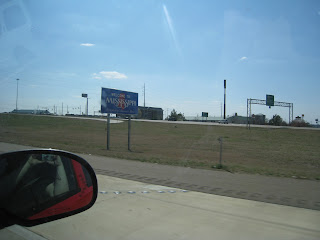 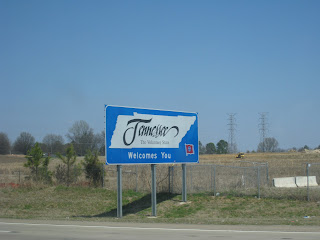 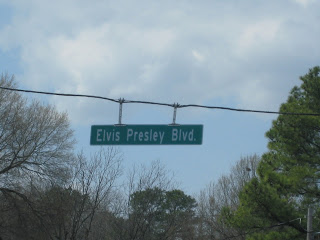 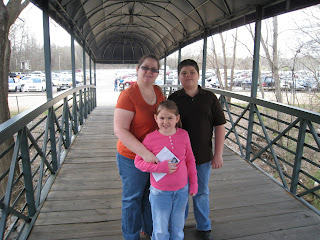 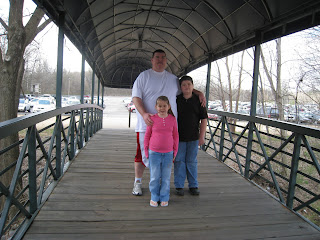 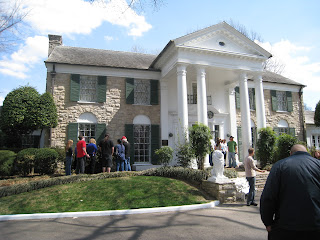 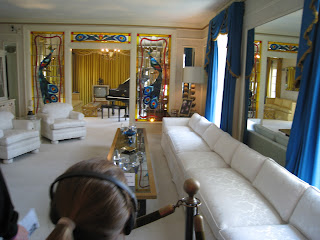 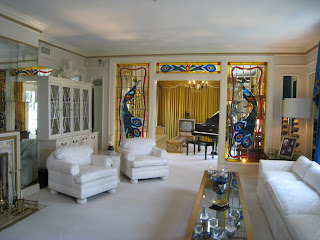 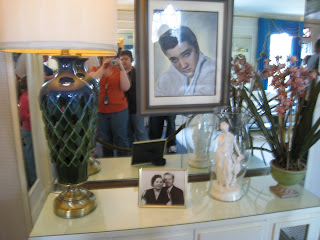 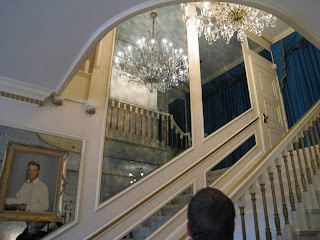 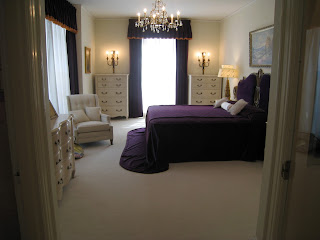 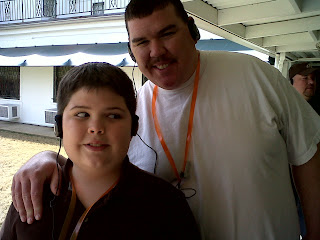 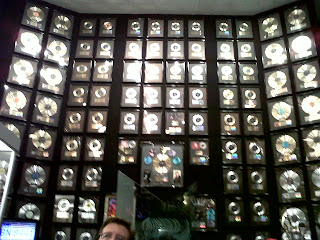 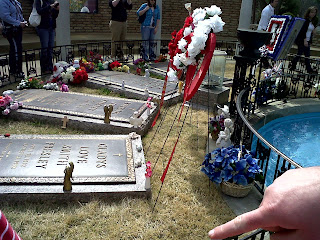 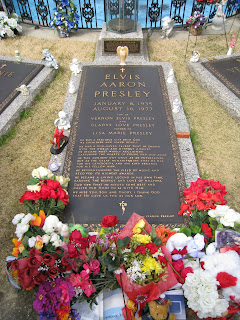 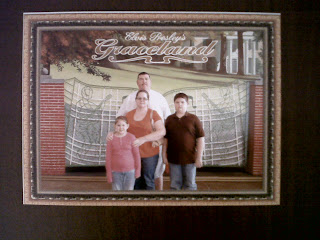 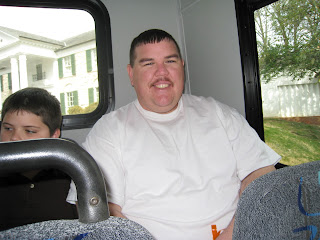 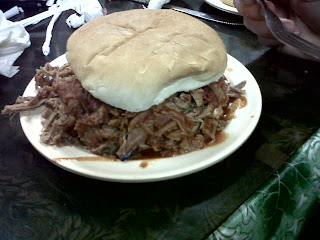 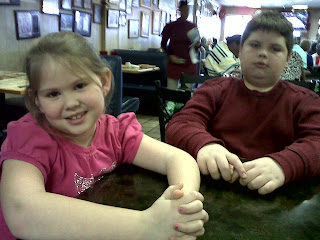 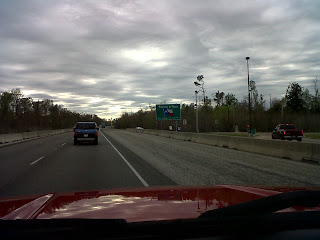 Wow, I've been totally neglectful to my blog.  :(

We've been so busy these days.  The last time I posted we went to Memphis.  We took 2 trips there.  Once during Spring Break and then again at Easter.  Those trips will be something I will never forget.  My first road trip with my kids.  With Chad working out of day this year we've traveled around to see him alot.  He came home from Memphis 2 weeks after Easter on April 19th I believe.  He took a week break and then the following Monday he went down to Port Lavaca, Texas.  So of course the kids and I took a trip down to visit him on June 12th for a few days.  He finally finished that job on July 8th.  So on July 16th-19th we went on vacation.  Cause you know we didn't have enough vacations going to see Chad...  ;)  We took our anual trip to San Antonio.

Rewind a little bit to the end of the school year....

Both the kids had Perfect Attendance for the year.  I was so proud of them.  It's hard to be at school every single day the school doors are open.  I tallied up the days I subbed.  80 days!  The last month of school we had field trips.  Saira went to the Houston Zoo.  Her and I had a great time.  Would love to go back sometime without the school and during a cooler time of the year.  Ryan went to the Downtown Houston Aquarium.  That was a neat place.  I was so thankful that his great teacher made those kids get around and enjoy everything there was to do.  She even had me doing things...LOL!!  She got my fat butt up on the Carousel.  I'll have to share a pic of that!

So the last week of school, my kids didn't have school.  They earned their Flex Days for having good attendance and good grades, but Ryan also had to pass his TAKS test....  AND he did!  I was so worried, those tests are hard on those kids.  He passed his Writing, Reading and Math.  :)  I cried when I got his note from the school saying he got the Flex Days.  Very proud mama moment!  So the kids didn't have school, but I had to sub that week.  The kids hung out with their friends while I worked.  But before school was out for the rest of the kids in school, there was Memorial Day weekend.

We had so much fun that weekend.  The kids went to the beach for their first time ever.  They have been down to Galveston to "see" the beach when we did other things there, but they never have been on the beach.  That was tooooo much fun!  Then the next day, all 4 of us went on the river for the first time in a friends party boat.  That was FUN, until HELL fell out of the skies...LOL  It came a bad storm.

Chad is still working in Memphis. So as soon as school was out (at 3pm) on Thursday, we headed on out for our 9 hour trip. It was much better traveling at night with the kids. Not that last time was bad. But they were able to sleep more than 1/2 the way here. Traveling at night brought back memories from when I was a kid. Back then, we traveled around ALOT! If we weren't moving, we were on a vacation some where. It was great. We also did alot of traveling from CA to TX. And that's where my trip the other night brought back memories. As a kid, I'd stay up late keeping my mom awake. Back then I was great at it. ...I was a motor mouth...LOL ;)

I feel bad that the kids are missing church in the morning for Easter, and the egg hunt. BUT, sometimes I think it's more important to go and see the one you love! So in the morning, we're going to meet Chad at IHOP when he gets off work. And when we're done, we'll pack up and head home. Probably some where around 9am or so.

Maybe when I get home I'll remember to upload some of our Memphis pics.... from this time and last time.

It's Spring Break time! And to spice up our break, I decided Tuesday evening we'd take a trip to Tennessee to visit my sweetie. I've never gone on a trip on a whim. Big time exciting!! But anyways, my sweetie is working here in TN. So why not come visit, right?
In a few days we plan on going to Graceland. And I can't wait to snap some memories while we're there.
Posted by Jayme Downs at 10:27 PM No comments:

Ok my friends... I need your help, what site offers the best scrappy kits for the money? I need awesome kits!! :) I've been spoiled the last 3 years with the best kits on earth. ;)
Posted by Jayme Downs at 8:42 PM 2 comments:

That's the day my baby girl turns 7!
I can't wait for the challenge reveal with the Color Team at Scrapperie.  I loved the color combo!!

HAPPY MLK DAY!
Posted by Jayme Downs at 11:57 AM No comments:

Tuesday I was called in to sub for the 5th/6th grade Science teacher.  Come to find out, she's going to be having gallbladder surgery.  I subbed all week for her.  So now I'm going to be her permanent sub until she returns.  Which will be anywhere from 4-6 weeks.

Last school year I thought I was going to be the permanent sub while the Pre-K teacher was out during her maternity leave.  Which was a week before school let out for Christmas.  But someone was already set up when school started.

Now that I'm the permanent sub, all the teachers have told me they are going to try real hard not to miss because they all like me to be their sub.  ;)

They can have me back at the end of February....lol

Soooo soo so so COLD!!

Here we are on Saturday night at 7pm and it's 32 degrees.  Last night it got down to 19.  Suppose to be the same tonight.  All week we've gotten down to freezing temps.
Posted by Jayme Downs at 7:13 PM No comments:

I can't believe it... I'm a Tres Chic Girl. I'm so excited to work on Sandi's design team with Scrapperie. I'm ready to get some scrapping done this year!!!
Come enjoy the monthly crops and weekly challenges as well as the Wednesday Night Chat Nights.  There is always lots of fun going on at Scrapperie!!