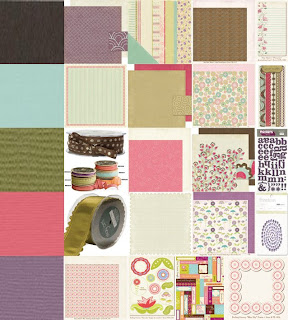 Scrapperie's March kit is up for Pre-Order!!!  You won't want to miss out on this!!!  Pictured above is the "Essentials" kit.  But there is also "Trimmings" and "Extras" to order as well.  But if you want it all, then go for the "Pièce de Résistance".
I can't wait to get my kit and create things for the Design Team!!!!!!!

Posted by Jayme Downs at 9:23 AM No comments:

Lookie what I have!!! 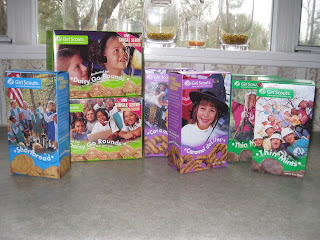 yep, 7 boxes of cookies...  Mmmmm!!
And what's funny, is I have about 10 or more boxes coming from my brother.  HOLY COW, craziness I tell ya.  I won't be Girl Scout cookie hungry for awhile.  LOL  What's cool, is that I get to try out the cookies from the other baker.  The only cookies I've ever eaten are from ABC Smart Cookie.  But the baker of the cookies from my brother is Little Brownie Bakers.  So I'll get to try some of the different varities.  :)  Yep, I'm excited!!!
Posted by Jayme Downs at 10:05 AM 4 comments:

Labels: family, Random
Oh my goodness!!  Last Wednesday Saira brought home a Library book to read on her own for the first time.  She's been going to the Library and getting books all year but this time she's getting the little reader books.  It's an AR book and today she's going to test on it.  I can't wait to see how she does.  She's growing up so fast, cause now she's a reader.

Her first book, "The Yellow Boat", by Margaret Hillert.
Posted by Jayme Downs at 7:26 AM No comments:

Friday I subbed for Pre-K.  That class is the one I sub most for.  But it was also the Valentine's Parties for all the kids.  Except for my class.  They had theirs on Thursday because the teacher knew she wasn't going to be there that day.  Sometime around 9:30ish I guess, the secretary buzzed in and asked me to come to the office.  I walk in and roses all over the place.  She pointed to mine and said those are for you....  I opened the card, already knowing who they were from...lol ;)  And told them they were from Chad.  She said, "awwww, he's still sweet as ever."

I took the roses to my class and all the little kids Oooo'ed and Ahhhh'ed over them.  ;) 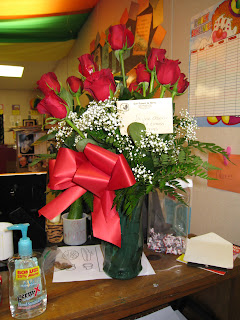 A disaster and some lazy time

Last weekend, Jan. 30th, 31st and Feb. 1st I was in Galveston on a Scrapbooking retreat. Ohhhh, it was heaven. I think I enjoyed myself more this time than last time in August. It gave me the first opprutunity to go to Galveston to see how it looked since the Hurricane. I was so suprised. It didn't look near as bad as I expected. Infact, the Sea Wall was up and running. People were all gathered on the beaches (even though it was COOOOOLD!) It was even prettier than it ever has been in many many years. I was impressed. Galveston has done a supurb job at restoring itself. Two cheers to them!!

Anyways, I had a terrific time with all my scrappy buddies. Had some very good food, the house was neat, the bedding was way to comfy and the massage was what I needed. All the subbing last month had me all worn out. I was desperate for a massage!! I was able to get 14 pages done, and I finally took photos of the layouts so I can share with you. I'll do that later on after this post.

Monday and Tuesday I worked. Wednesday I was suppose to go in at 10:30. But instead, my water heater decided I didn't need to do that. I had taken the kids to school that morning. And when I got back, I sat down to watch tv, because I haven't done that in months. I had LOTS to catch up on. Around 9:15ish I guess, I heard this banging cracking type of a sound. And it came from my laundry room. And then I heard water. I thought that was rather weird since no water was running anywhere in the house. So I get up and I really hear the water running..... from the water heater. OMG!!!!!!! OMG!!!!!! OMG!!!!!! Panic mode kicked in. LOL I rushed and grabbed a screwdriver to take off the wall panel where the water heater hides...lol And YEP, WATER was EVERYWHERE already. It was starting to leak out into the hall and my sons room.....but not the laundry room. It was leaking out at the walls. So I got my dad on the phone cause there was no shutoff valve. The stupid retards that put it in didn't put a shut off valve. Thanks mister!! I talked with him for a minute and decided to call the city to shut off the water, cause I couldn't get the knob to turn at the main shut off on the house. So they came ASAP, Thank you city of Daisetta. They FINALLLLLLY did something quick and prompt for the first time that I've lived here and I've lived here for almost 12 years. They responded to my phone call within like 1 or 2 minutes. I was shocked. In the mean time Chad's on his way home from work. When he got here, we went to Lowes and bought a new water heater and a shopvac. I spent the day sucking up water and draining the water heater. Thank goodness it wasn't too bad in the hall and Ryan's room. We finally got the water heater put in around 7pm. And boy howdy, it gets HOT! I'm thinking Chad is going to have to lower the temp...lol

So Thursday I was called in to sub, but I still needed to work on the carpets some more. I did it a couple of times and did the lazy thing for the day. WOW, that was great. I needed it so bad. Did the same thing on Friday. :)

Saturday was Ryan's Advanced Green belt test for TaeKwonDo! He did awesome!! Thursday is the award ceremony this week.

No work today, but I work Wednesday and Friday. I wasn't thinking when the Secretary called earlier, but Friday is the kids Valentine's day parties. But I think I'll be able to pull off going to their rooms to help with the parties. I'm sure the teachers aid for that class will help me out for sure. ....she loves me! ;)

Still Busy as ever and TERRIFIC NEWS

My goodness, I'm so amazed at how busy my life has been since I signed up to sub in October. Out of 18 1/2 school days last month I worked 11 1/2. And so far, the first 3 school days of this month I'll be working all 3. LOL But enough of all that...LOL

Last weekend I went on another wonderful Scrapbook Retreat. This time it was held in Galveston at the Galveston's Red Victorian. The owner of this home is amazing, she served lots of delicious meals and provided a great area for scrapping. I can't wait to go back there. It also provided me the first opprotunity see Galveston since Hurricane Ike came through. They have come a long way, I was impressed with all the restorations.

I will be taking photos of my layouts as soon as I get the chance, I promise. I'm excited to share my 14 layouts. :)

The Scrapperie was looking for it's new Design Team. ....and I will be one of the Guest Designers with the Tres Chic Girls this go around!! I'm so ecstatic over the news!!

And right now, Scrapperie is having there Fantastic February going on. It's always tons and tons of fun!!! There will be challenge after challenge for you to do. As well as games and classes. You'll earn points for all the things you do. The more points you get the more chances you'll have to win from the Fantastic February Prize Pool Drawing. Which consists of gift certificates to the boutique, tons of mini kits, mini-albums, acrylic albums, stamps sets (with inks) cardstock packs, cards kits, Essentials, Extras and Trimmings monthly kits- and someone can even win a Pièce de Résistance kit! If you join in, please mention that I sent you. I hope to see you there!! :)
Posted by Jayme Downs at 9:49 PM 4 comments: